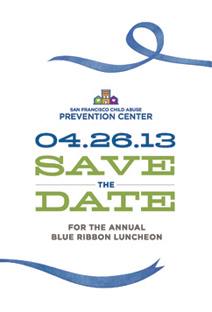 Christopher Keane attended and spoke at the Annual Blue Ribbon Luncheon Friday, April 26th.  As a volunteer at the San Francisco Child Abuse Prevention Center, Christopher was pleased to be in the company of boxing legend Sugar Ray Leonard whom was the keynote speaker at the fundraiser, although Sugar Ray wasn't there there to talk about boxing. He spoke about the new challenge he is taking on, to prevent child abuse.

"It happened so quick," Sugar Ray told a sold-out crowd, speaking to more than 500 attendees about the people he trusted, who molested him when he was a young teenager, an aspiring Olympic champion. "The only problem was I told no one because I was ashamed," he told ABC7 News.

Bringing the audience to tears with his powerfully, emotional story, Sugar Ray explained why he finally decided to go public with his story, the full story.  With his support for the San Francisco Child Abuse Prevention Center, over $450,000 was raised at the luncheon, including a surprise auction package of his autographed boxing gloves and even lunch at his Southern California home.

Christopher was able to speak words of thanks to Sugar Ray, as well as all of the supporters, and families affected by Child Abuse in attendance.  On behalf of Keane Law Firm, our guest in attendance was Adam Carbajal and his family, Maria, Alfonso, Alfredo, and Nena.

We would like to share with you Christopher's words, which are for all of us on this journey of Child Abuse Prevention.

On behalf of everyone here, I'd like to thank you, Mr. Leonard not only for joining us today, but for what you are doing with your life to prevent child abuse.

I know that you have many championships and titles to your credit…Growing up in Detroit, I’m acutely aware of the 1981 title you took from Thomas Hearns…...But today, I’d like to give you a new title –Champion of Children – because you have earned it.  You could have kept quiet about the abuse that happened to you when you were a young boy, inflicted on you by both a coach and a booster, but you didn't.

You chose to do what you could – to fight back – not with your fists this time, but with your heart and your endurance – and you did it for the best of reasons – you didn’t do it just for yourself, you did it to prevent the abuse of other children.

Your story as a young boy is a perfect example of what this Prevention Center can provide to children.  You were never given the benefit of the safety awareness program, which as we just heard from Katie, teaches young children how to keep themselves safe.

When I told your story last week to my 8 year old son, Miles, who was taught the Center’s safety awareness program in 2nd grade this year – I told him that your coaches touched you in unsafe ways just like the Penn State coach did, and Miles asked me right away if you told someone.  Which showed me he’s paying attention in school…And I said you did, but you waited many years until after the men died.  He said to me that it was good you said something, but it “would have been better if you could have said something right away and gotten some help and stopped those men from doing it to other kids.”

You, as a child, were never taught this.

I, as a child, was never taught this.

But our children, in San Francisco, with the help of the Prevention Center, will be taught this and the world they live in will be better off.

We are now teaching children how to keep themselves safe because, as a society, we have had enough.

Mr. Leonard, in your fight against child abuse, you made the choice to win.  I learned that when first writing your book, you originally only told half the story of the abuse.  Then, gathering courage from others –from watching another celebrity tell his story of his childhood sexual abuse on the Oprah show -  you realized that you had to reveal the whole truth, no matter how much it hurt.  So you went back and re-wrote that part of your book – changing history by telling what actually happened.  So that you could own the truth.  So that your truth could change the future for other children.  And, by doing this, you have won.  Again.

And now he is here…on our team.  To help us win. Because before he was Sugar Ray he was just Little Ray.  And there are thousands of little Rays in our city -  my children, your children, your grandchildren, and they need our Prevention Center’s team.

Teams have stars.  The Ray Leonard’s.  The Katie Albright’s.  The persons and players everyone knows.  But teams mostly have unsung heroes.  The sparring partners.  The support team.  The ones who change the momentum - behind the scenes.  The ones who do what needs to be done to win – and you never hear about them.

No one person here is more important than - the team.  And – as a team - we can’t wait for the person sitting next to us to carry the whole load.  We each need to do our part.  Because it takes everyone.  It takes - the team.

Before I step down I want to leave you with the words from someone who I consider to be a legendary coach – of children.  Willy Wonka.  When questioned by a doubting Veruca Salt about his ability to make lickable wallpaper for nurseries taste like Snozberrys because Veruca had never heard of Snozberrys, Coach Wonka quickly got her attention, looked her right in the eye and reminded her ….

We are the music makers, and we are the dreamers of dreams.

And if we think and act that way, all of us, I guarantee you – when you look back at what you’ve done with your life and with the Prevention Center – you will be proud, and you will have changed history – for children.

My good friend, and fellow volunteer at the Center, Richard Pio Roda, will be up here next, to give all of us an opportunity before we leave here today, to choose to support our wonderful team – which is the San Francisco Child Abuse Prevention Center.  Thank you.

If you have any questions or concerns about what can be done to help children who have suffered from child abuse, or families of children who have died, please call Christopher Keane and The Keane Law Firm toll-free for free consultation at(888) 592-5437 (KIDS), click on contact us here, or use the web form provided at https://www.keanelaw.com